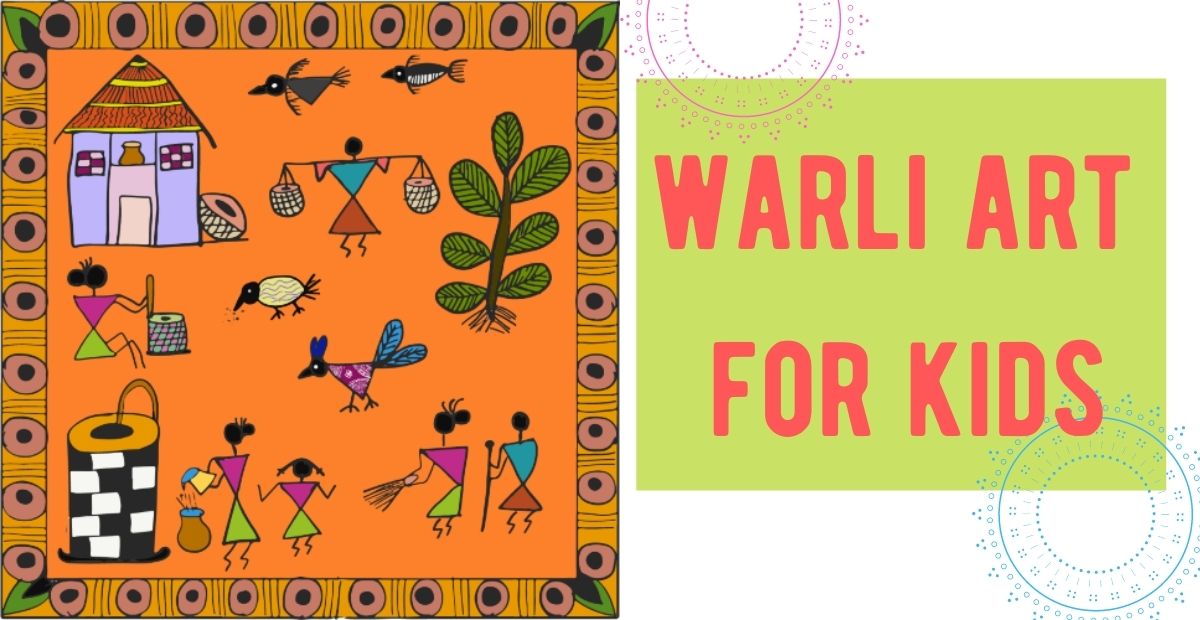 If you want to start introducing kids to tribal art forms, here is my post on Warli Art for Kids. This week I decided to do Indian folk art, Warli Art with my son. Warli painting is one of the most popular and famous Indian folk art. It is an easy art form for kids. It is made up of simple geometrical figures that are easily understood by kids. Warli Art is made of lines, dots, triangles & circles which kids are familiar with.

We discussed in detail what is Warli art, where did it originate, what colors were used originally, and different shapes used in Warli art. After looking at various Warli paintings for inspiration, he made his own Warli art piece.

What is Warli Art?

Warli art is an Indian tribal art from the state of Maharashtra. The word Warli refers to a piece of land in the Varli language, the local language of tribal people. It’s considered to date back to the 10th century. The artwork is monosyllabic and uses basic geometric shapes like circle, triangle, and square to represent different elements of nature.

Warli paintings were originally done on the red mud walls of huts. These walls were made using a mixture of branches, mud, and cow dung. As a result, most Warli art is done on an earthen red-colored background.

Originally the Warli paintings were made on a mud wall with a white paste. This white paste was made from rice paste and water, with gum added to help it stick together. Then it was painted on the wall using a bamboo stick.

Circle – Circle represents the Sun and the Moon.

Square – Square is regarded as a sacred enclosure.

Two inverted triangles with a circle for a head are used to represent humans. Women are differentiated from men by drawing their head buns. Whether it’s a depiction of an animal, a human, or a god, faces are never given any detail.

Warli paintings are mostly done by the women of the tribes in times of festivities and celebrations. Unlike many other art forms that focus on depictions of God and deities, Warli art mostly depicts the tribes’ daily activities. They depict regular village settings and people going about their daily lives.

Warli Art is very simple for kids as it uses simple shapes and triangles. We began by looking up some Warli paintings on the internet to study figures and take inspiration. I have compiled below the figures and drawings of Warli Art which are easy for kids to make.

Two triangles are used to create human figures. In most of the Warli art, human figures are engaged in activities such as dancing, cooking, climbing trees, farming, and fishing.

First, draw an X. Then connect the free ends. Then draw the neck followed by the head. Now draw hands and the legs. You have the option of leaving it as is or color it.

Warli art also depicts animals and birds as part of village life. Triangles are also used to depict the animals. You can tell whether the animal is a cow, a deer, or a horse by its appearance.

The huts are also in the shape of triangles. The huts’ straw roofs are indicated by the thin small lines on the roof.

Here are some designs of trees inspired by Warli art.

Here is my son’s Warli piece of art. I asked him to create a village scene inspired by Warli Art.

There are some Warli Art Kits for kids available on the Internet.

This Warli painting kit will keep the kids occupied for hours while also allowing them to put their free time to good use. It contains four different outline sheets, 6 non-toxic colors, 2 paintbrushes, a palette, craft adhesive, 1 set of tissue paper, 4 hanging Doris, and an instruction booklet.

Bring out your child’s artistic side and watch them build their first Warli house with this PurpleFly Warli House Kit. It comes with not one, but two fantastic Warli houses for your children to paint.

I hope you found this post of Warli Art for Kids helpful. Do share your kid’s Warli piece of Art with us. We will add it to our post.