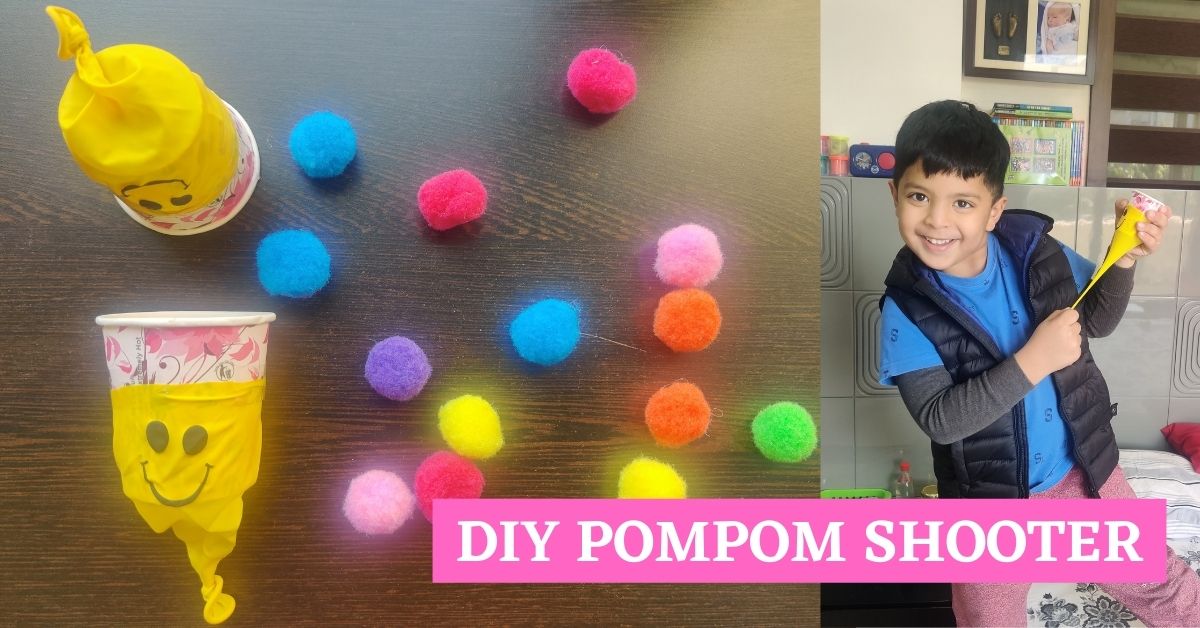 After a long time me and my son did a STEM activity. We made a pompom shooter with a paper cup. These pompom shooters are very quick and easy to create and keeps entertained for hours. I bet kids of all ages will love this activity ! Also check our Sink or Float experiment for Kids.

Children enjoy shooting toys, but there is always the issue of safety. This is why the pompom shooter is so awesome. Because pompoms are delicate, your children will not be hurt if there is an unintentional friendly fire. And if you’re planning a birthday party but don’t know what to do for party favors, create these pompom shooters and you’ll be all set! I’m confident the kids will prefer them to the typical little toys seen in gift bags. These party poppers may also be done as a group activity to keep the youngsters occupied while the parents mix and chat. This activity also makes as a STEM activity, as there’s some simple physics involved! I have explained the science at the end of the article.

This activity is also great for toddlers to use their hand muscles and practicing hand-eye coordination. It also encourages gross motor development because your child will undoubtedly run about the room, firing at random items and chasing the pompoms!

How to make a Pompom Shooter with a Paper Cup

First start with paper cup. Cut off the bottom of the cup with scissors. I just used knife to do the same. But make sure to keep knife away from kids.

Stretch the open end of the balloon over the bottom of the paper cup and use a clear tape to secure the balloon to the cup.

Your pompom shooter is ready ! Now put a pompom into the cup, pull the knot of the balloon back and fire ! Your pompom will launch into the air. You can stuff the opening or make shoot one pompom at a time

Don’t just limit yourself with pompoms. Try finding small objects around the house to launch.

Games to play with Pompom Shooter

You can play many different games with this DIY pompom shooter.

These are some game ideas we came up with. Let me know in the comments if you came up with your variation. You can even make it an experiment by comparing several launch pieces to determine which one performs best and flies the furthest.

Secondly, you can discuss gravity with this experiment. Because everything that goes up, must eventually come down, the pompom continues to move until gravity gradually causes it to fall to the ground.

Let me know in the comments if you will try this DIY pompom shooter with your child.