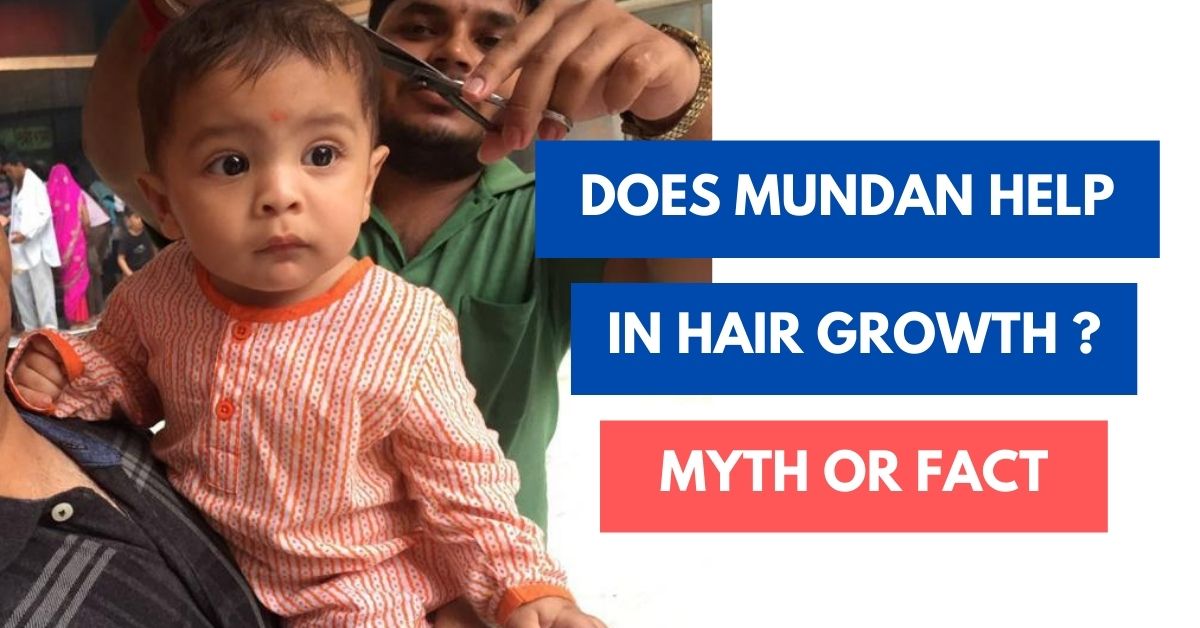 Does Mundan Help in Hair Growth in Babies?

Does mundan help in hair growth in babies?

Does repeated tonsuring or mundan result in good hair growth?

Some new generation moms are skeptical of mundan ceremony. They like their little ones soft and silky hair. Others do not want their kids to go with the procedure. This post will help you to find all answers related to mundan ceremony.

What is Mundan Ceremony?

The Mundan ceremony is tonsuring or shaving the head of the child to fully remove all birth hair. It is also known as Chaula or Choodakarana in some communities.

When is Mundan Ceremony Done?

The time and ritual of mundan vary from religion to religion, from community to community, and even from family to family.

The recommended age for mundan under Hindu traditions is 1 year or 3 years of completion. If it is not done in first and third year, 8 years or 16 years is the next choice.

Why is Mundan done? Traditional Belief for Mundan Ceremony

Mundan is mostly done because of traditional beliefs. It is believed that the baby’s hair is a symbol of negativity and unwanted memories of his/her past life. Thus, removing the hair from the head of the infant leads to the shunning of all the negative characteristics and memories of the previous birth. Mundan thus represents the beginning of a new life.

How is Mundan Ceremony Performed?

Every community has its own way of performing the mundan ceremony. Some families perform it at home, others do it at a temple. Some even perform on banks of holy rivers. The urban parents also get it done at salons.

Most of the families perform it on an auspicious date and time. The date and time are given by the priest. Then a barber is hired for the job. After the shave, a paste of turmeric and sandalwood is applied to the scalp and left for few hours. Sandalwood gives a cooling effect to the scalp and turmeric is known for its antiseptic and anti-inflammatory properties which helps to heal any cuts or wounds which may have occurred during the tonsuring process. Some even draw a Swastik on the head. In some families, a small tuft of hair also called “choti” is left in the back.

Some families and communities also offer a part of the cut hair to temples like the Tirupati Balaji temple or the Salasar ji.

Does Mundan Help in Hair Growth In Babies?

Mundan does have few benefits but its most claimed benefit of having better hair growth is actually not true if research paper by, L.Lynfield and Peter Macwilliams is to be believed.

According to their study shaving has no effect on hair growth. The hair after shaving appears to be thicker because the tip of the hair becomes blunt after the shave. Even after shaving the head, the roots stay the same. Hair growth is influenced by the hair follicles that are below the skin on the scalp. Since they are not affected by shaving, there is no real improvement in the structure of the hair. It does not accelerate the speed of hair growth either.

What are the Benefits of Mundan?

Though mundan doesn’t help to boost hair growth in babies, but there are other benefits for babies.

Things to Keep in Mind if You Choose to Perform Mundan

When Will Baby’s Hair Grow Again After Mundan?

Hair growth depends on the hair follicles. Generally, you would start to see new hair within a month after shave.

How to Have Thick Hair Growth in Babies?

Don’t worry if your baby has less hair on his head right now. It’s going to grow and get thicker by the time he or she will turn three years old.

Just like babies skin color, facial features changes as he/she grows older, the same thing happens with his /her hair. Every baby sheds his/her birth hair and mature hair grows on its own gradually. And this hair will have a different color or texture compared to baby hair at birth. It is usually thicker than birth hair. We got our son’s hair shaved at home when he turned one year . We purely did the ritual for traditional reasons. Personally, I don’t believe that mundan helps in thicker and better hair.  My son was born bald. Till one year he had very little hair. Even after the mundan, he had little hair. He got full growth when he turned two years old.

Mundan ceremony is done at 1st or 3rd year of baby’s birth. It is the same age when baby’s hair is growing/maturing to become thicker naturally too. So it appears that shaving has a part in thicker and better hair.

As a parent, it is completely your choice. There is no scientific proof that mundan helps in hair growth in babies or it leads to thicker hair. If you do it for traditional reasons too, there is no harm.

Hope you found this post helpful and answered all your queries related to mundan ceremony. Please comment and let me know your thoughts on the same. You may also like to read our article Benefits of eating in Silver utensils for Babies.